Dario is all muscle and very little fat, true to the bare minimum nature of his entire life. Despite looking rather ghoulish, he's very healthy and strong, complimented with a deep chest, slim waste, and handsome, angular face. He's still quite young, so it's a bit bizarre for him to be looking so sunken already, suggesting his appearance will worsen with age. He sports a low, gravelly voice, and a musky smell typical of a rugged survivalist like him, not particularly pleasant or unpleasant.

Dario and his sister Helena were born to a pair of dogs that were just starting to get the hang of survival. They thought that they were ready for children, but clearly they weren't, as his mother Agatha wound up starving herself to death just to feed her children, and his father was becoming more and more vulnerable to illness with his ever increasing age. Determined to give his kids a life worth living, Durant soldiered on through his pain and suffering to keep Dario and Helena alive. The siblings knew him as a stubborn bastard, a true asshole that acted more like their general than their father, reprimanding them for every little thing. However, it was his love made him so hard on them, even if it put a wedge between himself and his children. But to Durant, making sure his kids were strong survivalists was more important than their emotional integrity.

Eventually, Durant simply couldn't walk anymore, covered in cancerous tumors and sores that refused to heal and sicker than he'd ever been, he gave his last bit of strenght towards giving his children one final command. He ordered them to eat his corpse after he died. Dario and Helena were traumatized, but obeyed his command, not having many other options as helpless pups. While rationing out their father's body made them sick on numerous occasions, it gave them just enough strength to start learning how to catch their own food. It was a hard road, and they fought constantly over what happened in the past and blaming each other for what they didn't do to the point that they absolutely despised each other, but they made it work, and eventually, it was time to move on. One day, Helena simply disappeared, and Dario made himself scarce from their home with no other reason to stay. That place carried too many reminders...

Dario carries his father's name now, knowing that his flesh would never be as permanent, hardened by that harsh lesson he learned so long ago. He's grateful for the man's sacrifice, but feels remorse for what he had to do... It's all he can do to repay him to make sure his name gets passed around, and that all know what an amazing, stubborn, resilient dog he was. 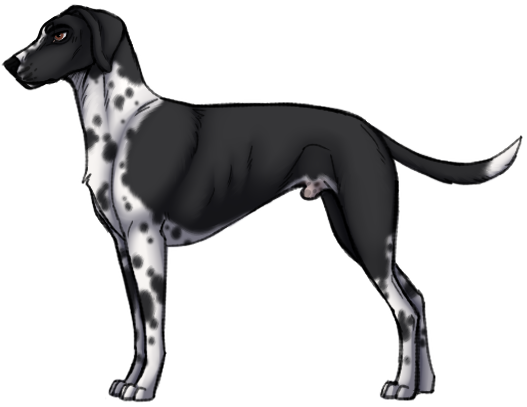